Knight Lore is an action-adventure game known for popularising isometric graphics in video games. The game was developed and published in 1984 by Ultimate Play the Game and written by company founders Chris and Tim Stamper.

In Knight Lore, the player-character Sabreman has forty days to collect objects throughout a castle and brew a cure to his werewolf curse. Each castle room is depicted in monochrome on its own screen and consists of blocks to climb, obstacles to avoid, and puzzles to solve.

Ultimate released Knight Lore third in the Sabreman series despite having completed it first. The Stamper brothers withheld its release for a year to position the company advantageously in anticipation of the game’s effect on the market. Knight Lore’s novel image masking technique, Filmation, let images appear to pass atop and behind each other without their contents colliding. This created the illusion of depth priority, which the computer did not natively support. By delaying Knight Lore’s release, Ultimate protected sales of their upcoming Sabre Wulf and created another Filmation game before other developers could copy the style.

Knight Lore is regarded as a seminal work in British gaming history and has been included in multiple lists of top Spectrum games. Critics considered its technical solutions and isometric 3D style a harbinger of future game design. They praised the game’s controls and atmosphere of mystery, but noted its difficult gameplay and criticised its sound and occasional graphical slowdown. Knight Lore was the best-selling game of January 1985 and was named 1984 game of the year by the Golden Joystick Awards and Popular Computing Weekly readers. Though it was not the first isometric 3D video game, Knight Lore popularised the format. When the isometric, flip-screen style fell out of fashion, Knight Lore’s influence persisted in computer role-playing games. Retrospective reviewers remember the game as the first to offer an exploratory “world” rather than a flat surface, but consider its controls outdated and frustrating in the thirty years since its release. 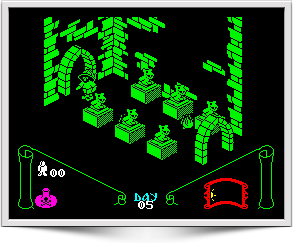 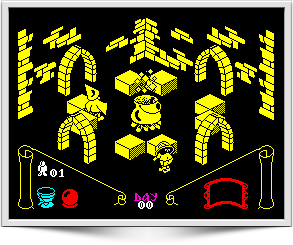 The player, as Sabreman, has been bitten by the Sabre Wulf and now transforms into a werewolf at nightfall. He has forty days to collect items throughout a strange castle and brew a cure for his curse. An onscreen timer shows the progression of day into night, when Sabreman changes to a werewolf, returning to human form at sunrise. Some of the castle’s monsters only attack Sabreman when he is a werewolf. The game ends if the player does not finish the cure in forty days. The game’s only directions are given through a poem included with the game’s cassette tape.

The castle consists of a series of 128 rooms, each displayed on a single, non-scrolling screen. Sabreman must navigate the 3D maze of stone blocks in each room, usually to retrieve a collectible object, whilst avoiding spikes and enemies, which kill him on contact. The player begins with four lives, and loses one for each death; running out of lives ends the game. Stone blocks serve as platforms for the player to jump between; some fall under the player’s weight, some move of their own accord, and some can be pushed by ghosts. Sabreman jumps higher when in werewolf form, which helps in specific puzzles. The player often needs to move blocks to reach distant objects, which are then used as platforms to reach areas in other puzzles. To complete the game, the player must return 14 sequential objects from throughout the castle to the wizard’s cauldron room. At the end of the game, the player receives a final score based on the remaining time and amount of the quest completed.

Ultimate Play the Game, represented by its co-founding brothers, Tim and Chris Stamper, was uncommonly taciturn in matters of press and marketing, though they provided some details on Knight Lore’s development to Crash magazine.

While Knight Lore was released as the third game in the Sabreman series, the Stamper brothers had finished it first. They withheld the game for about a year for market reasons: they thought that Knight Lore’s advancements—copyrighted as the Filmation engine—would hurt sales of their upcoming Sabre Wulf, and used the extra time to prepare another Filmation game (Alien 8) to preempt the sales that would be lost when other publishers would try to copy the technique. “We just had to sit on it because everyone else was so far behind” Tim Stamper recalled.

Filmation and Knight Lore’s graphical novelty lay in how images could render without overlapping. Filmation introduced “masked sprites” whereas earlier games used “planar sprites”, which overlapped without regard for depth order. Chris Stamper’s solution was to use image masking. A mask is a version of an image that defines a background from the subject matter in different colours. When combining the mask and the on-screen composite image, the mask’s “background” data was ignored and a hole in the shape of the desired image sprite was added to the background. This was filled in with the sprite’s details. Thus, rooms in Knight Lore were drawn one sprite at a time through this masking method. In more recent times, contemporary images render with layer priority set at the individual pixel level. Knight Lore is depicted in a single colour that changes between rooms so as to avoid attribute clash, a computing limitation wherein an object’s colour interfered with those of others in close proximity.

Knight Lore is widely regarded as a seminal work in British gaming history. Computer game magazines lauded the game, writing that its graphics were the first of its kind and marked a sea change from its contemporaries.
According to Kieron Gillen (Rock, Paper, Shotgun), Knight Lore is second only to Elite (1984) as an icon of the 80’s British computer game industry. British magazine Retro Gamer described players’ first impressions of Knight Lore as “unforgettable”, on par with the experience of playing Space Harrier (1985), Wolfenstein 3D (1992), or Super Mario 64 (1996) for the first time.